Jubilee CAC Dog Show in Jászberény on 05th September of 2020 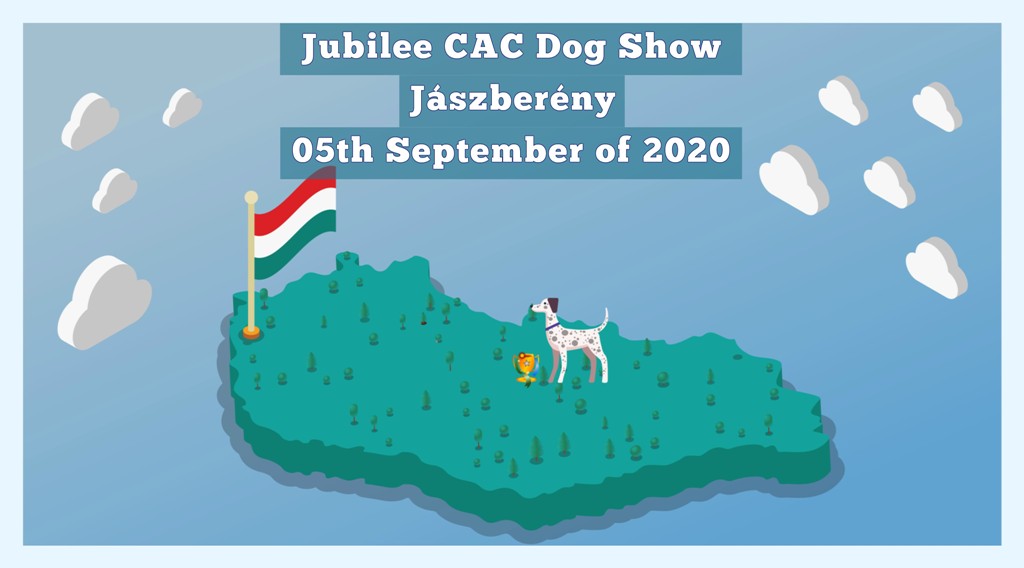 Jubilee CAC Dog Show will be held 05th September of 2020 in Hungary in Jászberény city on the occasion of the 50th anniversary of the foundation MEJÁSZ. The venue of the show is the Electrolux Sports Ground (next to the Zoo).

Due to the viral situation, the following health restrictions should be observed in the exhibition area:

Dear exhibitors and visitors, we ask that the restrictions in force be observed in the interest of all of us! We want you to leave the event healthy!

The exhibitors will receive a printed catalog and the descriptive judgment.

For foreign exhibitors with on site payment!

For show informations, please, you write to the following email address:
mejasz1970@freemai.hu

Organize by Association of the Hungarian Leonberger Breeders and Lovers 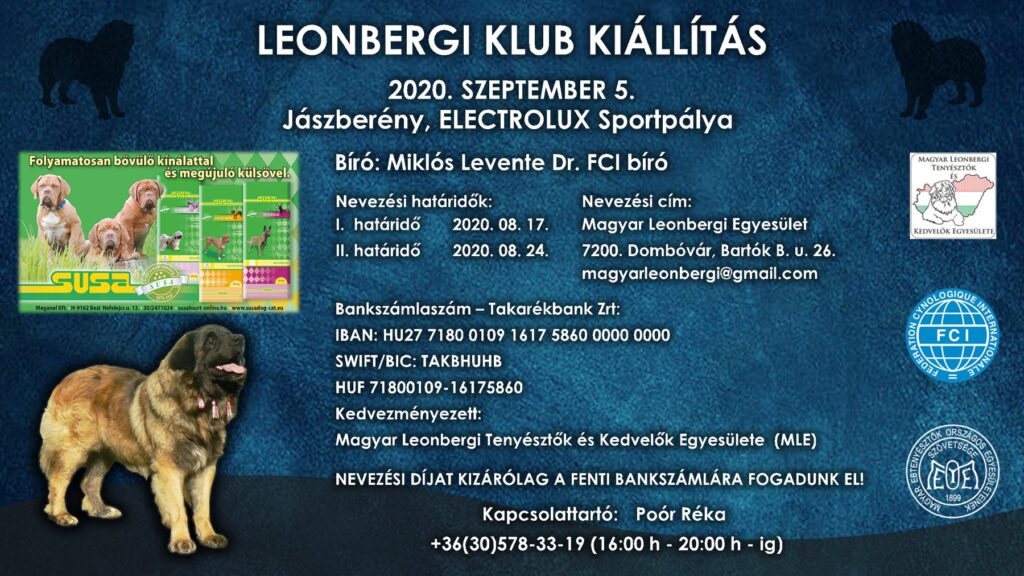 I introduce you to the city of the dog show: Jászberény

The city of the CAC dog show is Jászberény, which is located in the heart of the Great Plain on the two sides of the river Zagyva. Jászberény is the second most populous city in the county as the “capital of Jászság”.

Archaeological records indicate that the area was inhabited as early as prehistoric times, and later later Avars settled in the area. Specifically, the settlement was formed during the reign of the Árpád-house, which was unfortunately completely destroyed by the Tatár invasion.

The people of the Jász populated this region in the 13th century. From that time on Jászberény became the intellectual, economic and religious center of the Jászság. In Turkish times, the city belonged to the Sultan’s private treasury, and a plank castle, was built to protect it, which unfortunately became the prey of the fire and it was no longer rebuilt. The town also took part in the War of Independence in 1848-49, from volunteers recruited from Jászság was formed the Lehel hussar regiment in Jászberény. After the 1950s, the city began to develop more and more, the first large-scale industrial plants were established, which provided the population with more job opportunities.

Among the sights of Jászberény we should first mention the Jász Museum, which has been operating since 1931, and which in the framework of its permanent exhibitions written and material memories of the past of the Jász people. The most valuable piece of the collection on display in the listed building is the richly carved ivory horn, horn of Lehel, which was one of the heroes of Hungarians adventuring in Germany at the end of the 10th century, Lehel leader possessed.

Other historical attractions in the city are of the Gothic origin and Baroque design Magyarok Nagyasszonya Catholic Church, the Franciscan Church, which built in the 16th century, and the Roman Catholic Church of the Assumption of Jesus.

In Jászberény vibrant cultural life works thanks to its annual recurring events, such as the International Dance House and Music Camp, the Csángó Festival, the nation-wide Honey Fair and the Jászberényi Summer. It works in the city the internationally renowned Jászság Folk Dance Ensemble, the Lehel Ballroom Dance Club, the János Palotásy Mixed Choir and the Mihály Székely Choir.

It can be a real recreation for families the Zoo and Botanical Garden, which has been operating since 1979, which is one of the smallest zoos in Hungary with 4.5 hectares. The zoo showed an almost constant picture for nearly two decades, but from the mid-1990s major changes began, the tight enclosures were replaced by spacious catwalks, and other near-natural innovations were introduced.

The aim of the zoo is to keep and present the animals in the best possible conditions, so the catwalks are spacious and enriched with environmental elements, imitating natural habitats. Like domestic zoos their main tasks is educations and conservation education.

In the zoo every day with zoo pedagogical programs for guests. During programs that began in 2001, animals receive their daily food, which they often have to work on, and visitors can hear a wealth of information about the animals.

In 2003, the zoo started to expand towards the arboretum, visitors are literally taken into the forest, where there are three study trail within the 2-hectare arboretum, and visitors can learn many important things about bird and forest protection, for example. The Bird Protection study trail presents 66 bird protection tools and methods with color images of more than 90 animal species at 41 stations and 50 information boards. The aim of the study trail was to involve the arboretum next to the Jászberény Zoo in the attention of the visitors and thus in the environmental education.