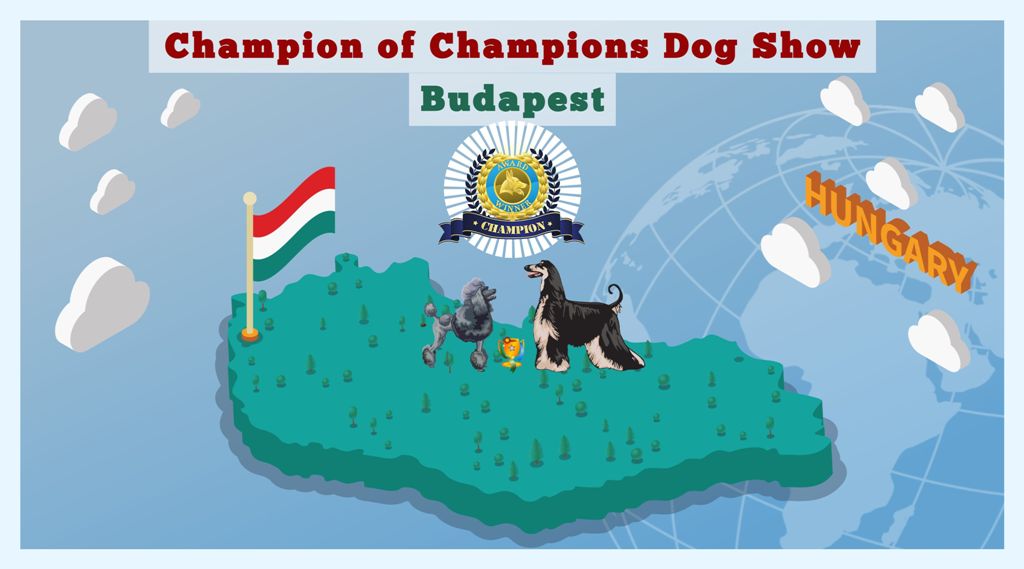 On 10th February of 2023 will be held the Champion of Champions Dog Show in Hungary in Budapest organized by the Hungarian Kennel Club. Venue: Hungexpo Budapest Congress and Exhibition Center. Judging starts at 2:30 p.m.

Special Champion rules for the Champion of Champions Dog Show

On the Champion of Champions Show, there will be an opportunity to gain the Hungarian Champion title for those dogs who are in foreign ownership, with foreign registration number.

The champion diploma can be applied for, at the showground, or later by post, the fee is 40 EUR.

The course of the judging:

The judges will list a maximum of four dogs per breed and sex and then select the best male and best bitch of each sex who will be named Champion of the Year. The best males and the best bitches compete for the BOB and BOS titles.

The winner (BOB) dogs are then re-compared in the ring of the respective breeds immediately after the evaluation of the complete breed group. In this breed group judging, the judge will not award a place, he will only select a certain number of dogs per breed group for the “duel” Best in Show program as follows:

The Best In Show will take place from 19:00 in the evening, with the following program:

The 24 dogs selected from the breed groups will be narrowed down by the 5 members judges in the Best in Show to 12 dogs, then to 6 dogs, and finally the 3 most beautiful dogs will be selected.

The leader judge is .

The veterinary regulations in force in Hungary: a valid rabies vaccination for the dog is mandatory to combat the territory of the exhibition entrance! Entry to the EU countries and non-EU countries is in compliance with applicable laws and regulatory requirements.

The damage caused by the dog owner is responsible!

Dogs with docked tail and cropped ears can be entered. They will be judged together with dogs with natural tail and ears.

Editorial Note: If you are browsing the entry from a mobile phone, please turn your phone horizontally so that you will see the “Entry deadlines and entry fees” properly!

The entry to the show is as per the current FCI and MEOESZ show regulation, accepted by signing the entry form or by using the online entry system.

Only dogs with FCI pedigrees can be entered, one dog can be entered only in one class. In case of absence the entry fee must be paid as well.

For correct class entries, please use the date of showing to calculate the age of the dog.

For the entry you must make registration before. When making the online-entry you can make changes after the entry done for 6 hours. When you not make any changes in this 6 hours, the entry will become final. You will get automatically e-mail after making tfhe entry(ies). It includes all information. Please check and in case of any mistakes, inform us by e-mail. In the online system you can only make the payment by Bankcard or Creditcard. If you not finish the creditcard payment in the online system, your entry will be cancelled automatically.Entry is valid only if the payment is successful via the online entry site. Entries cannot be saved int he system without payment.

Based on the decision made at the meeting of the MEOESZ Board of Directors on 12th December, 2018 it is possible to process certain administrative changes in duly justified cases as follows:

1. In case the injury or incidental death of the entered dog – which fact needs to be proved by a medical certificate –, the owner can initiate the change the dog for another dog owned by him, or else he can also request to use the entry fee for a later show to be organized by the same club.

2. When having a several day International show it is also possible to change the judging days in case the participant happen to have an unanticipated duty that cannot be postponed.

3. Change of class is only permitted upon the explicit appeal and request of the owner provided also the age of the dog allows it.

Please note the above mentioned administrative changes can be processed latest prior the final and published (but not the prolonged) entry deadline. All and any such request for change costs HUF 3.000/ 10 EUR change. Requests and appeals should be sent to kiallitas@kennelclub.hu

Administrative fees will be collected on the premises and on the date of Show. In this case the documents and start number of the concerned dog can be picked up at the Show Office prior the judging starts.

In case of bank transfer please use the following account number:
Name of the account holder:
MEOESZ

Please in the comment put the note: your dog’s name and the whole amount written, as we have to recognise it more easily. All information will be forwaded to this e-mail address noted. Please fill in the „remarks” field in every case otherwise we cannot identify your payment.

More information can be found on the official website of the event>>.

Or they can be found on the Event’s Facebook page>>.

More information about the exhibition can be requested at the following email address:
tibay.norbert@kennelclub.hu

City of the Champion of Champions Dog Show is

Budapest is the capital of Hungary, is a beautiful and exciting city, located in the heart of Europe often called as the “Little Paris of Middle Europe”.

The city of Budapest was officially created on 17 November 1873 from a merger of the three neighboring cities of Pest, Buda and Óbuda. Smaller towns on the outskirts of the original city were amalgamated into Greater Budapest in 1950. The origins of Budapest can be traced to Celts who occupied the plains of Hungary in the 4th century BC. The area was later conquered by the Roman Empire, which established the fortress and town of Aquincum on the site of today’s Budapest around AD 100. The Romans were expelled in the 5th century by the Huns, who were challenged by various tribes during the next several centuries. The Hungarian conquest of the Carpathian Basin started at the end of the 9th century, and the Kingdom of Hungary was established at the end of the 11th century. From around 1300 to the incorporation of 1873, Buda was the capital of the Kingdom of Hungary for five periods of less than a century each.

The historical monuments and the diverse city quarters reflect the city’s own 1 000 years old culture and history, the Buda Castle with the ancient town district; the St. Stephen’s Basilica, the Parliament and the Chain Bridge are the symbols of it.

Standing on the banks of the Danube River, the Hungarian Parliament is a notable landmark of Hungary, and a popular tourist destination in Budapest, which is situated in Kossuth Square. It is currently the largest building in Hungary, and the stunning example of neo-Gothic architectureand, it was designed by Hungarian architect, Imre Steindl, and opened in 1904. Built between 1885 and 1904 the Budapest Parliament became the symbol of the Hungarian capital. Not just becuse its sheer size – nearly 18000 square metres – but because of its detailed decoration, inside splendour and eclectic diversity.

The Parliament Building has a symmetrical façade and a central dome. The Parliament inside is also symmetrical and thus has two absolutely identical parliament halls of which one is used for politics, the other for guided tours. Home to Hungary’s National Assembly, the building also houses the nation’s crown, worn by 50 rulers, and dating back to the 12th century.

Parliament buildingIt is the most expensive building ever built in Hungary. The building has 691 rooms, 10 courtyards, 27 gates and 29 staircases. It also houses a public library with 500.000 volumes. The walls from outside are decorated by the statues of the most important historical figures of Hungary. The building is it stretches along the Pest side of the Danube between the Chainbridge and Margaret Bridge. As a traveler in Budapest, the Parliament building is one of the sights of the city that you have to visit.

Saint Stephen’s Basilica is the most important religious building of the city, where the Holy Right Hand of Hungary’s first king, Saint Stephen is on display as well.

In the Castle District are three churches, six museums, and a host of interesting buildings, streets and squares. The former Royal Palace is one of the symbols of Hungary – and has been the scene of battles and wars ever since the 13th century. Nowadays it houses two impressive museums and the National Széchenyi Library. The nearby Sándor Palace contains the offices and official residence of the President of Hungary.

The seven-hundred-year-old Matthias Church is one of the jewels of Budapest, it is in neo-Gothic style, decorated with coloured shingles and elegant pinnacles. Next to it is an equestrian statue of the first king of Hungary, King Saint Stephen, and behind that is the Fisherman’s Bastion, built in 1905 by the architect Frigyes Schulek, the Fishermen’s Bastions owes its name to the namesake corporation that during the Middle Ages was responsible of the defence of this part of ramparts, from where opens out a panoramic view of the whole city. Statues of the Turul, the mythical guardian bird of Hungary, can be found in both the Castle District and the Twelfth District.

Budapest is a global city with strengths in commerce, finance, media, art, fashion, research, technology, education, and entertainment. It is Hungary’s financial centre and was ranked as the second fastest-developing urban economy in Europe. Over 40 colleges and universities are located in Budapest, including the Eötvös Loránd University, the Semmelweis University and the Budapest University of Technology and Economics. Opened in 1896, the city’s subway system, the Budapest Metro, serves 1.27 million, while the Budapest Tram Network serves 1.08 million passengers daily.

Budapest attracts around 12 million international tourists per year, making it a highly popular destination in Europe. The city was chosen as the Best European Destination of 2019, a major poll conducted by EBD, a tourism organisation partnering with the European Commission. EBD writes on their website about Budapest that “the pearl of the Danube is not only the best European destination, it is also one of the most beautiful and safest cities in the world. Budapest offers the elegance of Paris, the architectural heritage of Vienna, the charm of Porto, Stockholm’s gentle way of life.”

Take the time to admire the pearl of the Danube, this wonderful city, the attractive Budapest!