CAC National Dog Show in Dunaújváros on 18th October of 2020 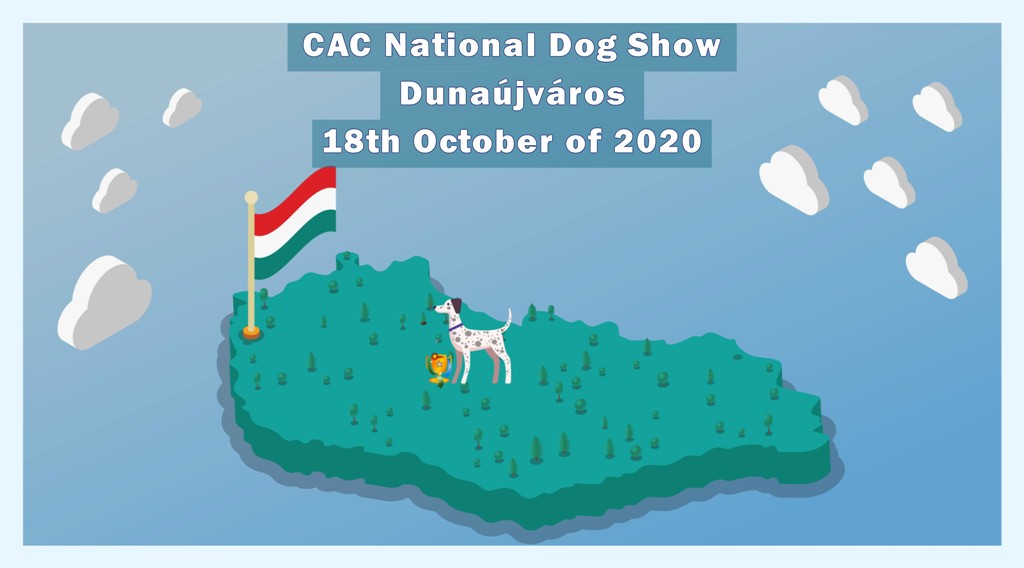 The CAC Dog Show will be held 18th September of 2020 organized by the Dunaújváros és Környéke Ebtenyésztők Egyesülete in Hungary in Dunaújváros city. The venue of the show is the Szalki-insular camping’s territory.

Entering to the show is in accordance to the FCI and Hungarian Kennel Club’s Show Regulations, the exhibitor by signing the entry form, or by entering in the online-system, the exhibitor is undertake to comply with and be bound by the rules itself.
Conditions:
• To the show only those dogs can be entered, who has original FCI registeed pedigree, one dog can be entered only to one class.
• Entry is available by online!
• The entry fee must be paid also in case of absence.
• Illegible and incomplete entry form can not be accepted.
• If you enter more dogs, the Minor Puppy, Puppy and Veteran classes entry fees is not counting as “First dog” in amount!

The entry fee must paid to the next account number:
Name of the account holder:
Dunaújváros és Környéke Ebtenyésztő Egyesülete

For show informations, please, you write to the following email address:
s.senator@vnet.hu

I introduce to the city of the dog show, to Dunaújváros

The city of the CAC show is Dunaújváros, which is on Hungary the second most populous settlement of Fejér county. Dunaújváros is located 116 meters above sea level, on the eastern edge of Mezőföld and on the right bank of the Danube. In the east it is accompanied by the Danube for 10 kilometers, and in the west it is surrounded by gentle hills.

The history of the town reveals, that the territory already was inhabited in ancient times and played an important role in the life of the Roman Empire in ancient times as Intercisa. The conquering Hungarians settled in the area at the beginning of the 10th century. Excavations from a later age revealed the Pentele, the predecessor of Dunaújváros, which got its name from the patron saint of St. Pantaleon Abbey, St. Pantaleon. The village was under Turkish rule from 1541 to 1688, and during the Fifteen Years’ War the population was completely extinct. After the liberation from Turkish rule, the Hungarian population was replaced by Rác people The Rác population of Pentele took part in the Rákóczi War of Independence, after the defeat of which the village would have been emptied again, if they do not bring Hungarian settlers in the village. After that, the settlement started to develop intensively. During the War of Independence in 1848-49, the people of the town fought under the banner of Kossuth, and then after the fall of the War of Independence, a large part of the population was forced into a line of agricultural wage laborers. During the administrative changes following the compromise, in 1870 Dunapentele was classified as a big village.

Today’s city was built six decades ago  by melting the former Dunapentele into itself and surrounding it. In its everyday life, the industrial city character dominates, the Danube Ironworks was built in the southern part of town, the Pentele district is located at the northern end of town, high above of town it is the New Town.

Among the sights of Dunaújváros, the protected values of the Old Town stand out, especially the more than three-hundred-year-old Baroque Serbian Orthodox Rác Church and the one and a half-century-old Neo-Romanesque Catholic Church with 3 bells in its 27-meter-high tower. A memorial to the Roman era, the Kőtár and Ruin Garden with its many tombstones and landmarks. Almost 60 works of art form the collection of the International Steel Sculpture Park, which is also part of the Cultural Heritage, on the picturesque Danube promenades. During our walk in Dunaújváros, it is worth visiting the Reformed Church, built in the 1980s, the Catholic Church built in 2000, and the Oval Lutheran Church.

Outstanding among the city’s cultural events is the three-day series of events on the Danube bank Parázs-Varázs, which is traditionally held in May every year, where all ages can find a program to their liking.

The lungs of the city are formed by large, well-kept green areas, protected trees and rows of trees all over the city, and the natural opportunities provided by the Danube make it livable and attractive the town. The determinants of the cityscape are the spacious green areas, flowery parks that soften the monumentality of each building. Industrial areas are also separated from the city by wooded areas. The presence of the natural environment ensures the ecological balance of the settlement.

Part of Dunaújváros is the Szalki isle, which previously had only an industrial role in the city, but has been transformed into a resort area due to the continuous development of the last decade. On Szalki Island you can find the sculpture park, fisherman’s inn, ferry and here is also the Camping, which in this case serves as the venue of the CAC dog show!