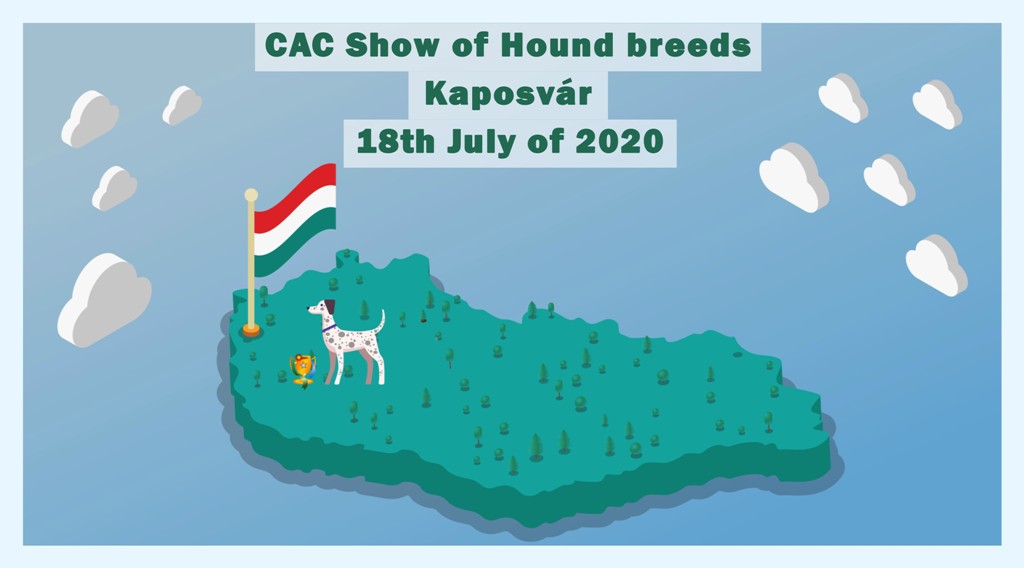 The CAC Dog Show for Hound breeds will be held 18th July of 2020 organized by the Somogy Megyei Kynológiai Egyesület in Kaposvár in Hungary. The venue of the show is at the area of the “BEST DOG” Dog School in Kaposvár.

In case you pay on fhe show you must pay the entry fee + 5 Euros. If you transfer entryfee form your bank account from abroad you have to pay the bank tax.They can not take over the costs of the bank wire transfer.

According to the decision made by the National Presidency, a 50% discount applies for all Hungarian dog breeds. Paying after the deadline results in losing the right for the 50% discount.

Entry will only be valid if the entry fee is also settled!

Entering by post, please use our Entry form, which can be downloaded. 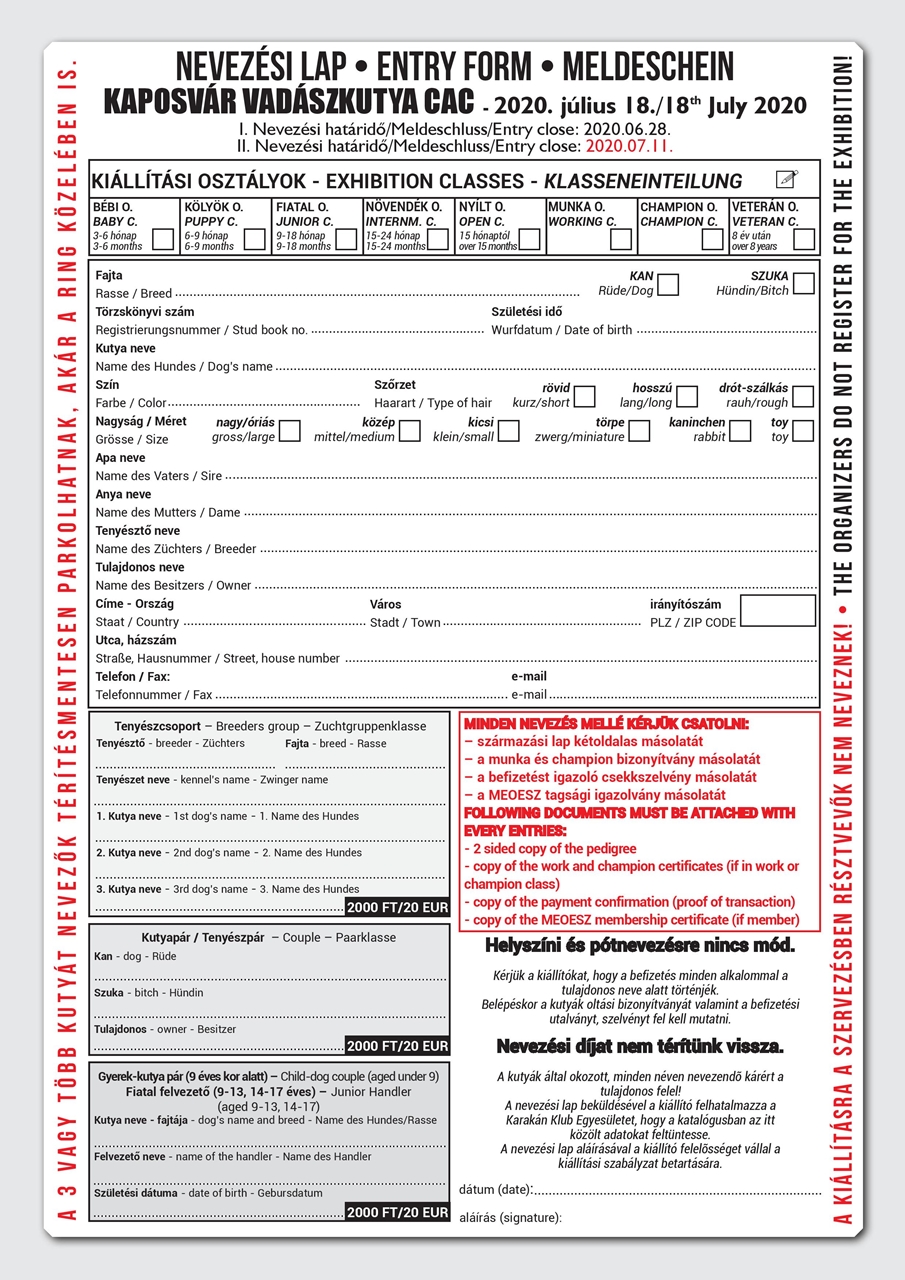 Without your signature we can not register your dog to the show!

The entry fee must paid to the next account number:

The exchange’s fee between classes is 5 EUR/change.

For show informations, please, you write to the following email address:
szmolka.janos@gmail.com

You can join the event on the facebook page below >>.

I introduce you to the city of the dog shows, Kaposvár

The city of CAC show is Kaposvár, which is located in a wonderful natural environment on the two banks of the river Kapos, in the area of the Somogy hills and between the slopes of Zselic. The city of more than 60,000 inhabitants is also a dynamically developing county seat, university town and episcopal seat also.

Kaposvár is a city of secessionist, of the festivals, of the fountains and of the flowers, which has undergone many renovations in recent years, thanks to which some parts have been completely modernized, but at the same time its historical monuments have been preserved.

Kaposvár, as a city of painters, where famous and internationally renowned Hungarian painters lived and created. József Rippl-Rónai, János Vaszary, Sándor Galimberti were connected to the city and its contemporary cultural life by several threads. József Rippl-Rónai was a decisive creator of Hungarian post-impressionist painting. In the early 1900s, he bought a park-like, wooded building on the hill of Rome in Kaposvár, where he lived and worked until his death. Surrounded by a park, the six-room two-storey villa, furnished with the artist’s own furniture, faithfully reflects the original condition. With more than eighty works of art, it provides a rich insight into all of the artist’s picturesque eras..

Culture plays a huge role in the life of the city and the locals try to create as many programs as possible to increase the values of the city and to preserve their traditions.The festivals time with a series of carnival programs begins, this will be followed by the music and dance event of the Kaposvár Spring Festival in March. In May will present tribute to the city’s before well-known painters with the City of Painters festival program series. In the four-day program series with a mediterranean atmosphere, the visitor can look around among the painters, craftsmen and performers who create on the street. In the summer months, the St. Jacob’s Summer Evenings performance series takes place on the open-air stage of the Benedictine Abbey of St. Jacob. Every two years, theaters gather in the city with their pieces for young children at the Biennale of Children and Youth Theaters.The offer will be also enriched by regional, national and international scientific conferences, meetings, fairs, championships and world equestrian competitions.

The sports life of Kaposvár is diverse, as a national sports city, they are at the forefront of both individual and team sports. The city’s basketball and volleyball team is a multiple Hungarian champion, the football team plays in the first class. The city has given Hungary many Olympic and world champions in recent decades, and it also boasts the titles of the Sports City of the Nation and the Settlement of Equestrian Sports. The title of Sports City of the Nation is given to those settlements that do a lot to enable the population of the city to participate in diverse and active sports activities for a healthy life.

Kaposvár, the city of flowers, which according to contemporary relics, was first given this title in 1930. The city maintains 2,000,000 m2 of green space, planting 140,000 flower seedlings a year in public spaces and parks where the eye can see, flowers adorn the spaces, the candelabrums, the downtown and the housing estates alike. In 2003, Kaposvár won first place in the Environmental Beautification Competition for the Floral Hungary, and then in 2004 he received a gold qualification in the European Flowery Cities and Villages Competition in France. In 2007 Kaposvár was awarded a gold diploma for the Floral Hungary, in 2009 got it the Settlement of the Year award, in 2010, Kossuth Square in Kaposvár was chosen as the most beautiful main square in Hungary.

Today Kaposvár is not only a city of flowers, but also a city of the fountains, the first of which was set up in 1913 in front of the theater. Today there are 28 working fountains in the city, which bring real refreshment to visitors and those living here.

Lake Deseda and the arboretum stand out from the natural surroundings of the city. The Lake is the longest artificial lake in the country, fed by the Deseda Creek. The lake and its surroundings are a popular habitat and resting place for many protected animals and migratory waterfowl. Its characteristics are the hungarian fire butterfly, the small apollo butterfly and the white stork.

The park forest of Deseda has been developed in the northern part of the lake with parking lots, playgrounds and educational trails. The hilly, swampy arboretum of the park forest stretches from the north to the lake as a peninsula. For the general public the botanical collection was opened in the year of the millennium, which with its eye-catching plant rarities, serves for relaxation, learning and rest alike. In the young botanical collection conifers, false cypresses, thuja, and firs were planted in rows and in groups. The silver linden, the beech and the birch are native to the arboretum. The walkway of the arboretum follows the waterfront line directly, and along the bike path we can round the whole lake.

Kaposvár is a cozy city, where the old and the new are in harmony, the patinated secessionist buildings of the city center, the extensive green areas, the parks and public spaces along with the magnificent flowers and the multitude of the fountains.

Dear reader! Thank you, for reading this article, I hope it was helpful to you!🙂 Please, share this post to reach, as many dog exhibitor and interested people as possible! Thank you!🙂

You can see other dog shows
in Hungarian Dog Show Calendar of 2020, please, click>>.

❤️😊 I am waiting with useful and valuable articles for dog lovers to my official authoring website, owners of pet dogs, breeders, exhibitors and everyone, who loves the dogs! 😊❤️

🙂 Thank you for your honorable visit! 🙂