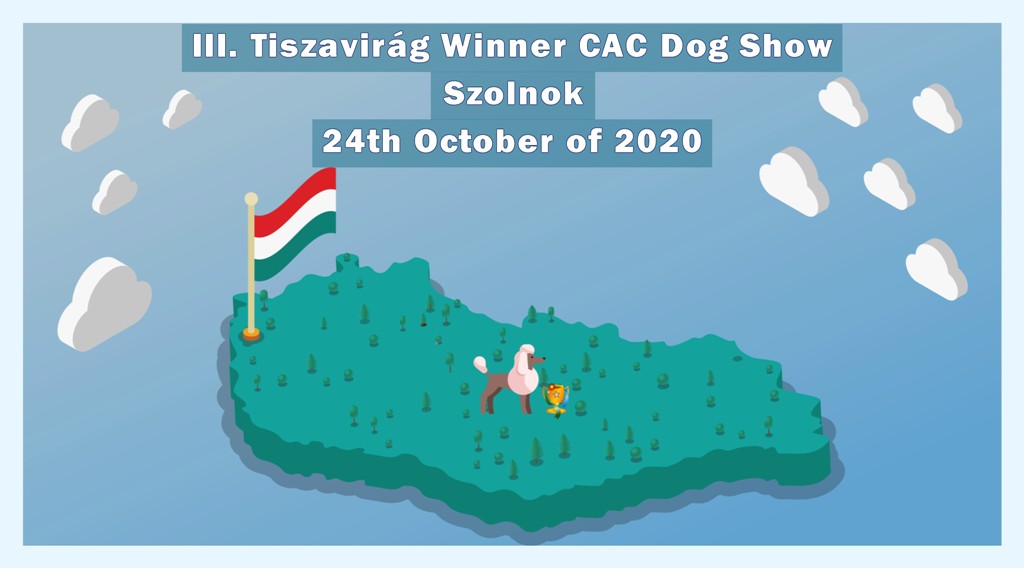 The III. Tiszavirág Winner CAC Dog Show will be held 24th October of 2020 in Hungary in Szolnok city. The venue of the show at the Tourist Center of Tiszaliget.

The exhibitors will NOT receive a descriptive judgement!

The entry fee must paid to the next account number:
Name of the account holder:
Magyar Ebtenyésztők Jász-Nagykun-Szolnok Megyei Egyesülete

I introduce to the city of the dog show, to Szolnok

The city of the CAC dog show is Szolnok, which is the seat of Jász-Nagykun-Szolnok county, important cultural, economic and health center. The city is located in the heart of the Great Plain, at the rising corner of the confluence of the Tisza and Zagyva, at one of the most important crossing points of the river. It is decisive among its natural endowments  the fact, that the city and the region are very rich in living waters.

In the time of the kings of the Árpád-house, the settlement was primarily known as a center of salt transport and an important crossing point. Information about the period at that time is incomplete, so much is certain that the population of the city was destroyed during the Tatár invasion. Its strategic importance in the fight against the Turks attracted the country’s attention. It was here that the strongest castle of the Great Plain was built in the 16th century, which the Turks were able to occupy due to the weakness of foreign castle defenders. There are no ruins of the castle now.

After the Austro – Hungarian Compromise, the city really started to develop: its industry, cultural life and education even stood out it from cities with similar populations. The start of shipping on the Tisza, which started in 1835, and then the opening of the country’s second railway line in 1847, revolutionized transport. The fact, that the city from 1876 it became the seat organized of Jász-Nagykun-Szolnok county gave further impetus to the growth.

Between the two world wars, the development of the city came to a halt. During the Second World War, Szolnok was attacked twelve times, during which the railway station and its surroundings, but also other parts of the city, suffered severe damage. In the 1950s and 1960s, significant industrial investments were made in the settlement. Huge construction began, housing estates were formed and the population of the city increased with the settlers from the area. Today, Szolnok has become an increasingly beautiful, clean, family-like city that is constantly evolving.

The city was destroyed 14 times in its history, so few monuments have survived to the present day. The Damjanich Monument, the Castle Church, the Tájház Museum, the Town Hall and the Synagogue are among them. Situated on the banks of the Tisza, the hotel with its healing water has been a popular excursion destination for tourists for decades. The most significant monument of the city is the Baroque-style Franciscan Church, built in the middle of the 18th century.

In 1928 built up on the banks of the Tisza the Tisza Hotel and Spa. The thermal water found here is excellent for the treatment of rheumatic and musculoskeletal diseases, for the alleviation of gastric diseases. Built in 1928, the hotel and spa has created a true Hungarian gastronomic tradition over the past decades. As it is located in the immediate vicinity of the Szigliget Theater, it was given a special role, as it was also a venue for banquets, a place of rest and meeting often visited by poets and other artists.

The Aviation Museum, opened in early 2016, is without a doubt the most interesting attraction of the city of Szolnok, the largest exhibition of aviation history in Central and Eastern Europe. Hungary’s largest aviation museum is not only a military aircraft memorial park, but also a well-thought-out, European-level theme park with plenty of entertainment opportunities. Countless interactive devices, 4D cinemas, simulators offer a special experience not only for flight lovers, but even for families with small children.

On the ground floor of the Hangar there are different types of fighters and reconnaissance machines in the battle line. Flying structures, replicas, and other flight history relics of museum value can be found here. Among the models on display, various interactive devices offer special experiences, you can look around in the cockpits of aircraft through virtual glasses, you can delve into the technical or historical details on touch screen tables. You can sit in two original fighter jets, and even one takes automatic photos of glitter-eyed pilot students that you can even share on the World Wide Web.

Various military aircraft, helicopters and locators are housed in the outdoor exhibition area. A well-equipped, well-kept playground is a blessing for families with small children, although it is not advisable to schedule a visit on hot summer days.

The wonderful natural environment of Szolnok is Tiszaliget, which is a huge, park-like green area with walking trails, boating opportunities, sports fields and a beach.