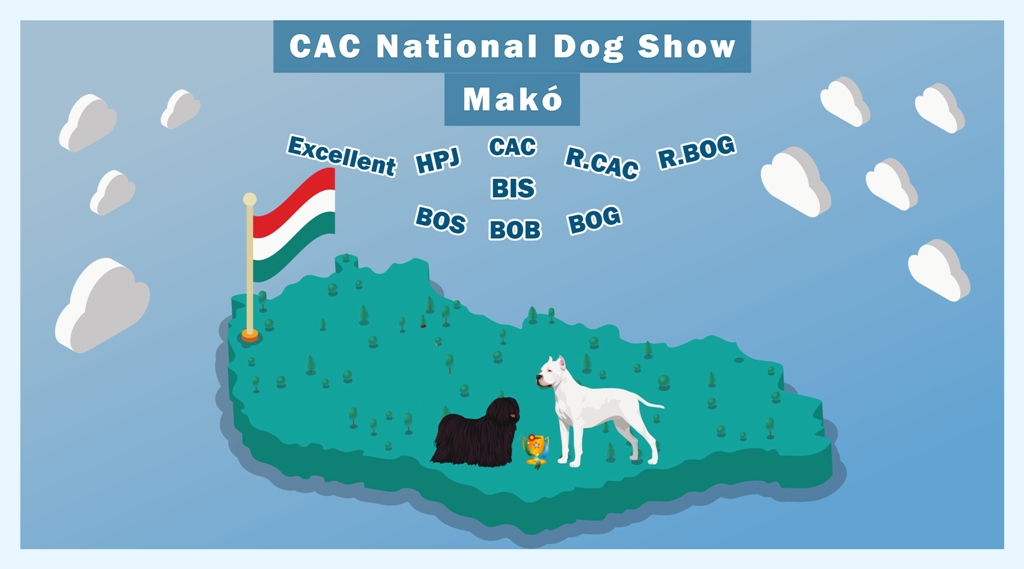 CAC national dog show will be held in Hungary in Makó city on 21h August of 2022. The venue of the show at the “Báló” grove sports court (located inshore of the Maros river). 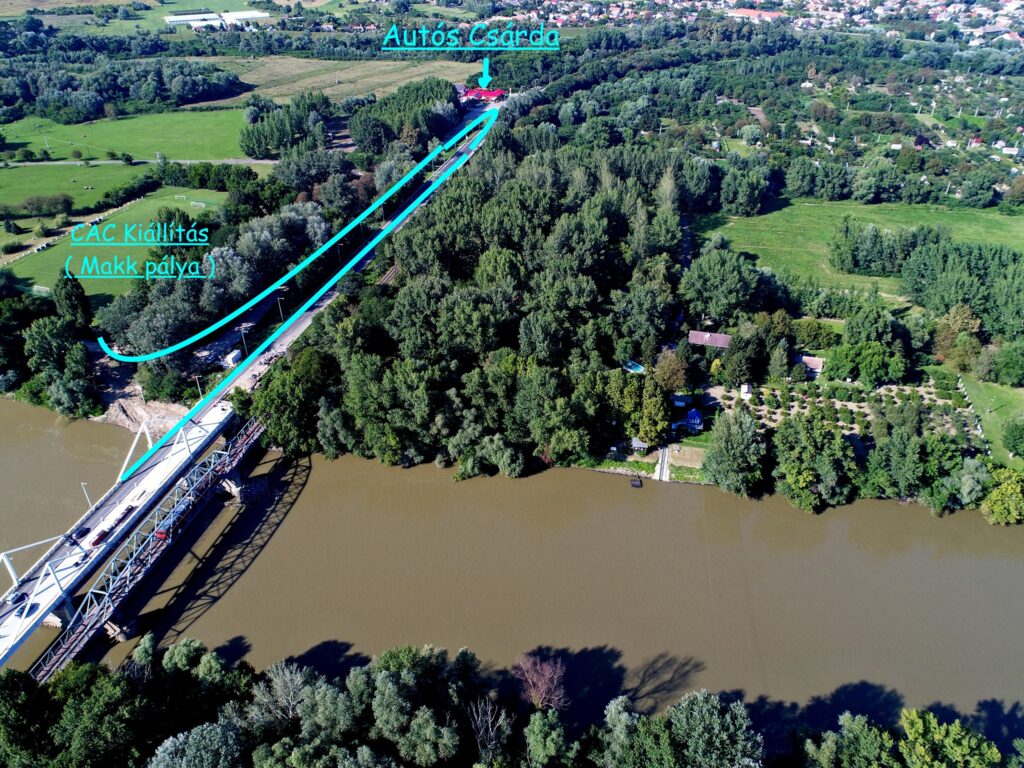 Online catalog will be prepared for the exhibition.
Exhibitors will receive written  judgements.

The leader judge is Mrs. Katalin Radvánszky from Hungary.

Dog breeds not recognized by FCI.

The veterinary regulations in force in Hungary: a valid rabies vaccination for the dog is mandatory to combat the territory of the exhibition entrance! Entry to the EU countries and non-EU countries is in compliance with applicable laws and regulatory requirements.

The damage caused by the dog owner is responsible!

Dogs with docked tail and cropped ears can be entered. They will be judged together with dogs with natural tail and ears.

Editorial Note: If you are browsing the entry from a mobile phone, please turn your phone horizontally so that you will see the “Entry deadlines and entry fees” properly!

The entry to the show is as per the current FCI and MEOESZ show regulation, accepted by signing the entry form or by using the online entry system.

Only dogs with FCI pedigrees can be entered, one dog can be entered only in one class. In case of absence the entry fee must be paid as well.

For correct class entries, please use the date of showing to calculate the age of the dog.

Please, click to the text, or the “+” sign and open the box, where you will see the entry classes.

For foreign exhibitors with on site payment! 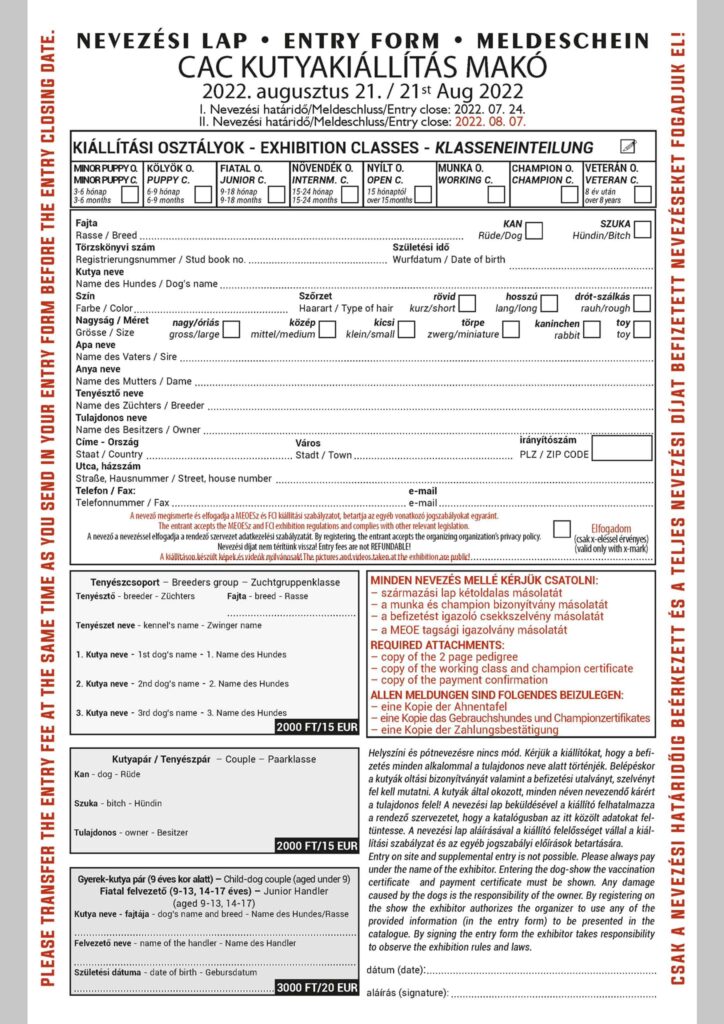 The city of the CAC Dog Show is

Makó is a small town on the right bank of the Mureş, with a population of 24,000. Due to the proximity of the Romanian and Serbian borders, it is a very important transport hub, one of the southeastern gates of Hungary.

According to records, Makón at the favorable Maros crossing point Hungarians who had already conquered also found a settlement called Velnök (Vönek), which is in Old Slavic means ferryman. From the second half of the 13th century, the settlement was named Makófalva from the owner Makó ban. Only during Turkish rule is the name Makóra abbreviated, which is a first name of pagan origin (meaning glorious in Turkish). The village slowly developed into a market town and became a sultan’s estate under Turkish rule. It was destroyed to the ground several times during the years of occupation. In 1966 it was destroyed by Tatar troops, of which it was rebuilt in 1699. The peaceful decades of the 18th century meant slow growth. By the 1800s, the city was registered as the 12th largest city in historical Hungary. From the beginning of the 19th century, the population also grew rapidly. From the very beginning, the source of livelihood was agriculture. After the compromise, and after the arrival of the railway, the products of the local agrarian market reached European markets. In addition to grain, onions and vegetables, horse breeding in Makó also became world famous.

After the First World War, as a result of the Treaty of Trianon the city became in a bad position. The difficult economic conditions led to a significant cultural life in the city, as Attila József, Gyula Juhász and Ferenc Móra also lived and worked here. From the mid-1900s, Makó’s development stalled. From this situation, the change of regime pulled the city out and began to develop rapidly from the 1990s onwards.

Makó is diverse in terms of attractions. Among the natural values, the Marosi floodplain, the medicinal mud and the thermal water are the most significant, and guests can enjoy their beneficial effects in the local spa. The city was made world famous by the Makó onion, which is now a trademarked Hungarian product and hungaricum.

Makó was a city of onion growers and traders. Makó onions are characterized by a rich taste that is distinguishable from all other onions, a high spice value, and their use is extremely versatile. Garlic from Makó is also of high quality, from which the oldest record kept in the Makó archives dates from 1755.

From a gastronomic point of view, the onion in Makó is an internationally recognized and sought-after product, and the related products (onion brandy, onion bread) also increase the city’s awareness. Also associated with gastronomy are a number of events that attract crowds of visitors to the city, such as the Grill Festival, the Onion Carnival and Onion Ball, the Makó International Onion Festival. The guitar festival, the Göngyfűzér Gala, the Makó Music Festival, the Makó Expo and the Operetta Festival enrich the series of colorful events of the city.

Outstanding among the architectural values ​​of the city are the buildings dreamed up and executed by Imre Makovecz, in which modern architecture is represented, and which are the defining buildings of the image of today’s Makó.

The ancient sacred place of Makó is the Calvary Hill, the Franciscan friends of Szeged came here during the Turkish occupation for the spiritual care of the Catholic faithful. Here stands the oldest building in the city, the monumental Calvary Chapel, built in Baroque style in 1734.

After the change of regime, the city of Makó announced movement for the flowery city of Makó, aimed at encouraging the population to beautify the environment. As a result, in 2004 the city won the “The Most Flowery City in Hungary” and “European Silver Medal City” awards.

The city offers nature lovers an exceptional opportunity to get to know the sight and sounds of the forest, to smell it, to experience the world of the crowns of the trees up close, to listen to the songs of the birds living on the trees and to admire them.

By building and operating a canopy promenade, giving this opportunity to all nature-friendly and inexperienced people and families, who can gain an insight into the magical world of living things and birds hidden among the branches of the forest, trees and canopies.