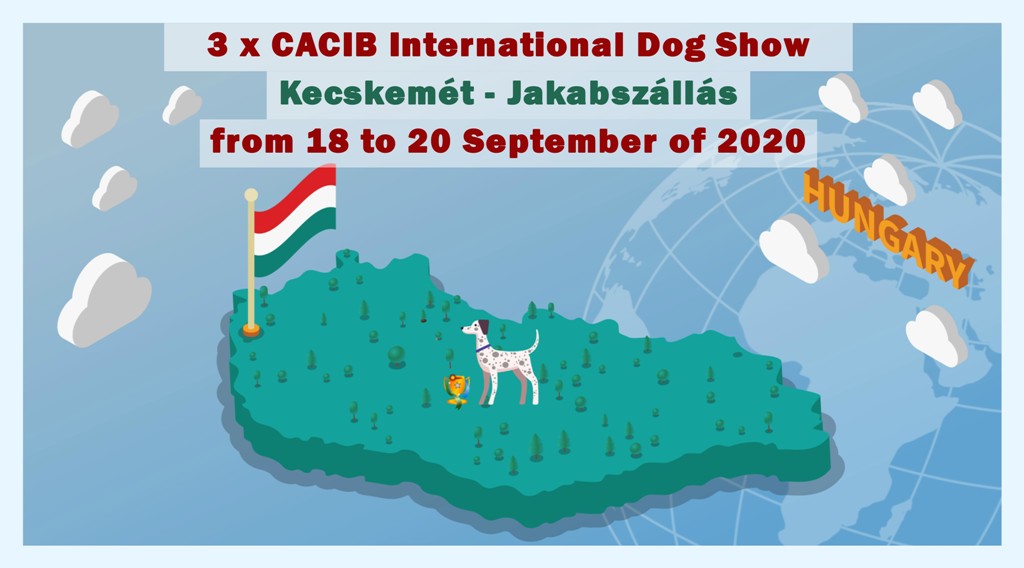 Dear Ladies and Gentlemen! Foreign exhibitors wo can’t participate on this dog show because the actually border situation, will receive a numbered voucher, which you can receive with the following method:
You need send a email to the dunatiszadogshow@gmail.com email adress , with the owner’s name and also with the dog’s name(s), if you have the entry confirmation please attach too. Then you will become the voucher which you can use personally or can use other person too (the voucher are „transferable” for other person) in the year 2021 on the CACIB shows which will be held in JAKABSZÁLLÁS. 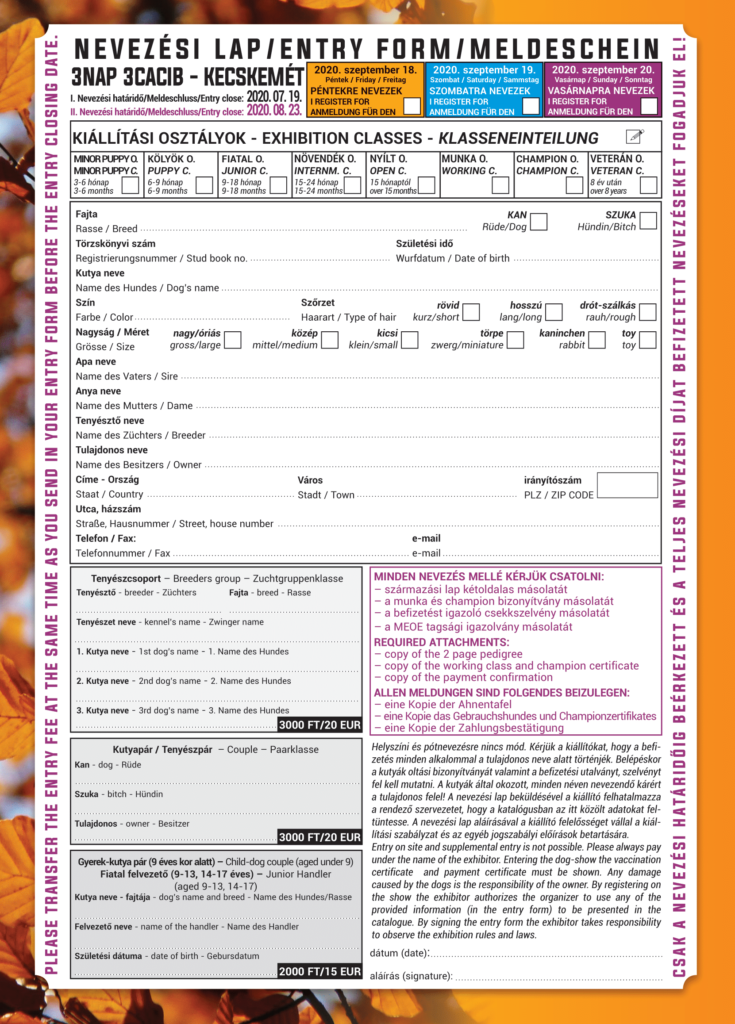 The entry fee must paid to the next account number:
Name of the account holder:
Duna-Tisza Közi Kynológiai Egyesület

The exchange’s fee between classes is 10 EUR/change.

Information of show in email:
dunatiszadogshow@gmail.com

Beginning of judgements: 13:00 p.m., after the CACIB judgements.

Or payment at the site of the dog show!

I present the venue of the dog show: Jakabszállás

The venue of the 3 x CACIB international dog shows is Jakabszállás, which is located 17 km southwest of Kecskemét.

The settlement, inhabited since the Árpádian era, was depopulated during the Turkish occupation, its territory has become wilderness. Jakabszállás became an independent village in 1922 under the name Szabadjakabszállás, it got its current name in 1926. After becoming independent, they built the village hall and a chapel, which were taken care of by the Franciscan monks. The Roman Catholic church was build completed in 1944. The Reformed Church was built much later, in the early 1960s.

In the Kecskemét economic narrow-gauge railway was built in 1928, and the roads crossing the settlement were built in 1939-42, thus significantly reducing the isolation. In the latest age flying has also conquered village of Jakabszállás. Its grassy airport became operational in 1994, and in 2000 a solid runway was built. In 2009, the equestrian track was opened next to the airport.

It was formed at Jakabszállás a 1: 1000 scale model of the topography and hydrography of Hungary. The Kis-Magyarország Botanical Garden is a collection garden of 3,200 plants on 93,000 square meters, an integrated adventure park, a meeting place for creative artists and a great eco-recreation for the guests visiting here.

A sleigh hill, 1: 1000 scale, 125 meters long, 17 meters wide and 8.8 meters high, which is modeled in the Himalayas, has been built nearby, and inside the hill there is a warming hut that can accommodate 70 people.

The town of Kecskemét is 17 km from Jakabszállás. The city is very rich in attractions. Get to know the city now.

One of the most beautiful city centers of the country can be seen in Kecskemét, where a number of famous buildings welcome the visitor. The first to be the Art Nouveau-style town hall decorated with majolica ornaments, the bells on the façade of which play Kodály’s Viennese bell, and whose ballroom is decorated with murals by Bertalan Székely. The ceremonial hall of the Cifrapalota building, decorated with colorful floral ornaments and evoking the world of Hungarian folk tales presents popular motifs of Art Nouveau. The building is today a gallery of the city, in which be found is the 19th and 20th centuries valuable collection of Hungarian painting.

The defining building of the Main Square is the Great Church, which is the largest protestant baroque style cathedral in the great plain. Opposite the Town Hall is the oldest architectural monument of Kecskemét, the Franciscan Church. The monastery connected to the Church was built by the Franciscans, which today houses the Zoltán Kodály Institute of Music Education and has a permanent exhibition on the ground floor showing the life of the famous composer. Zoltán Kodály’s name coincides with city. At the Zoltán Kodály School of Singing and Music, students are taught according to the criteria of the world-famous Kodály method. Among the famous natives of Kecskemét, in addition to Zoltán Kodály, we should mention the playwright József Katona, his name is preserved by the József Katona Theater and the poet Sándor Petőfi, who lived and worked in this town between 1828 and 1830.

Other Art Nouveau historic buildings in the city include the Old Church, also known as the Great Church, which has long been a model for the churches of the Great Plain. The Lutheran Church, designed by Miklós Ybl and built in a romantic style. An integral part of the cityscape is the Reformed Church, as well as the former Moorish-style synagogue with the onion-domed tower.

Among its sights we have to highlight the Kecskemét Wildlife Park, which is the smallest zoo in the country. It was established in 1971, mainly to present domestic game and native Hungarian domestic animals.

The Kecskemét Arboretum, rich in wonderful natural beauties, stands out among the natural sights of the city. The 62-hectare area of the garden contains more than 900 different plant species and their variants. The Arboretum with its significant plant populationis outstanding element of the green area of Kecskemét. In the young plant collection today already among other things in the shade of tulip trees, lily trees, mammoth pines, oaks and rubber trees we can relax. The youngest part of the arboretum is the oak collection, which presents 16 types of oak species! The arboretum, next to the educational trails, awaits visitors with a wooden playground, rain gates, a pergola and a new lookout tower.